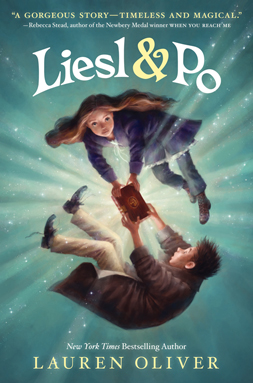 Liesl lives in a tiny attic bedroom, locked away by her cruel stepmother.

Her only friends are the shadows and the mice—until one night a ghost appears from the darkness. It is Po, who comes from the Other Side. Both Liesl and Po are lonely, but together they are less alone.

That same night, an alchemist's apprentice, Will, bungles an important delivery. He accidentally switches a box containing the most powerful magic in the world with one containing something decidedly less remarkable.

Will's mistake has tremendous consequences for Liesl and Po, and it draws the three of them together on an extraordinary journey.

From New York Times bestselling author Lauren Oliver comes a luminous and magnificent novel that glows with rare magic, ghostly wonders, and a true friendship that lights even the darkest of places.


"An irresistible read: This book sings."

"Invigorating and hopeful, this novel testifies to the power of friendship and generosity to conquer greed and depression."

"Teachers and librarians are always searching for an ideal read-aloud…LIESL & PO, the first foray into middle-grade fiction by Lauren Oliver…is such a story: crowded with distinctive characters and a twisty-turny plot, and rife with words like 'ineffable' an well as expletives like 'scrat,' making it all the more fun to read aloud."