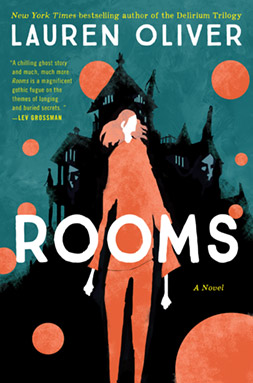 A novel narrated by two ghosts that inhabit the walls of an old house. Releases Fall 2014.

Lauren Oliver makes her adult debut with this mesmerizing story in a tale of family, ghosts, secrets, and mystery, in which the lives of the living and the dead intersect in shocking, surprising, and moving ways.

Wealthy Richard Walker has just died, leaving behind his country house full of rooms packed with the detritus of a lifetime. His estranged family—bitter ex-wife Caroline, troubled teenage son Trenton, and unforgiving daughter Minna—have arrived for their inheritance.

But the Walkers are not alone. Prim Alice and the cynical Sandra, long dead former residents bound to the house, linger within its claustrophobic walls. Jostling for space, memory, and supremacy, they observe the family, trading barbs and reminiscences about their past lives. Though their voices cannot be heard, Alice and Sandra speak through the house itself—in the hiss of the radiator, a creak in the stairs, the dimming of a light bulb.

The living and dead are each haunted by painful truths that will soon surface with explosive force. When a new ghost appears, and Trenton begins to communicate with her, the spirit and human worlds collide—with cataclysmic results.


"A smoky and realistic ghost story that subverts cliché. ...This satisfying novel will be enjoyed by Oliver’s fans and bring new ones to the fold."

"Lauren Oliver's Rooms is a sensational novel that easily glides between the normal and the paranormal. At times humorous, at times heartbreaking, Rooms is always emotionally resonant and, despite the presence of ghosts, very, very real."

“Oliver makes vivid use of both dead and living characters—all of whom are trapped in the past and striving toward a happier existence—to narrate her intricate, suspenseful story. The house’s breathing residents and ghosts alike find freedom, and the story culminates with an ending that arrives in dramatic and surprising ways.”

“With poetic prose, Oliver weaves a satisfying story arc for each character, and readers will be left with a feeling of peaceful acceptance.”

Download the official Rooms discussion guide below--and for more information about how to get Lauren to speak with your book club, please visit our News and Events page.